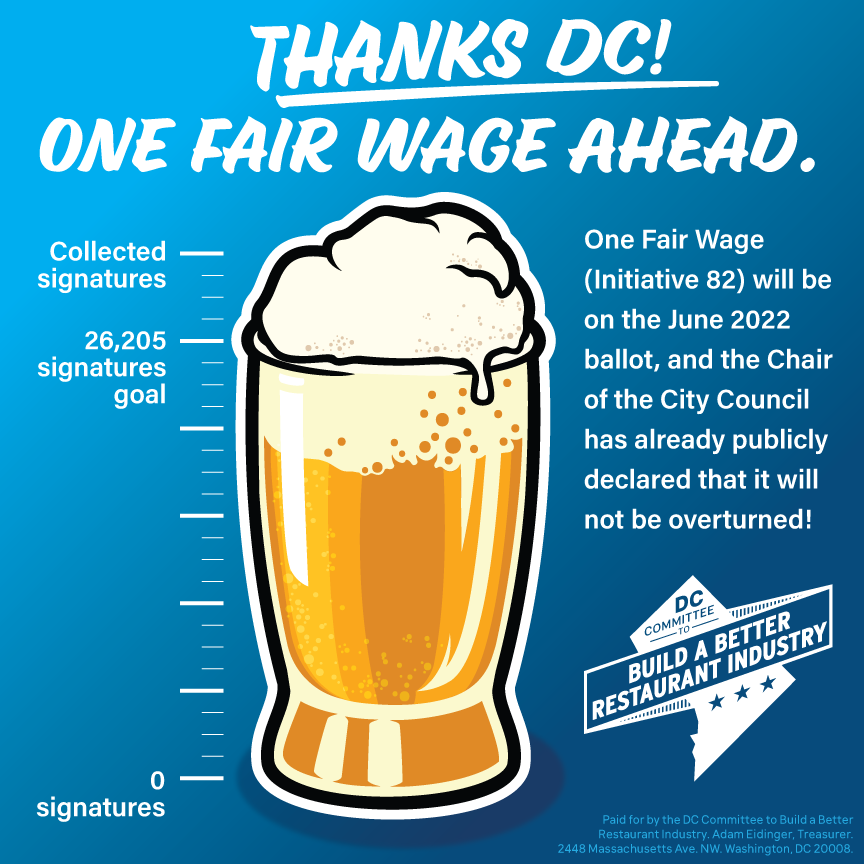 On November 8, 2022, DC Voters passed the "District of Columbia Tip Credit Elimination Act of 2021" aka Initiative 82, by a very large margin. Starting in the Spring of 2023, DC's subminimum tipped wage (currently $5.35 per hour) will graudally increase a few dollars each year and by 2027 Initiative 82 will ensure all tipped workers receive DC's full minimum wage of at least $16.10 plus tips on top!

Pandemic, Winter Weather Didn’t Deter Organizers of the One Fair Wage Movement
D.C.’s Voters Will Weigh in for Second Time on the Elimination of the Archaic Tip Credit

WASHINGTON, DC — Organizers of Ballot Initiative 82, formally known as “The Tipped Credit Elimination Act,” which will gradually increase the base wage for tipped workers and make it the same as non-tipped workers by 2027, have reached the milestone of collecting 5% of the signatures of registered District of Columbia voters. With over 26,205 “valid” signatures, the DC Committee to Build a Better Restaurant Industry (DCCBBRI) will focus the remaining three weeks of signature collection on ensuring the ballot initiative will withstand any potential challenge and be placed on the June 21 primary election ballot.

“Ballot Initiative 82 gives voters a powerful tool to help the restaurant industry fix its labor crisis and give low wage tipped workers a fair wage with tips on top,” said Ryan O’Leary, a ten year D.C. restaurant worker who filed Ballot Initiative 82 with the DC Board of Elections (DCBOE) in June 2021. O’Leary, who is an organizer with the non-profit organization One Fair Wage, adds, “For the sake of tipped workers in D.C., and democracy, we were not deterred by the coronavirus pandemic nor winter weather from collecting signatures from voters in all 8 wards. As of today, we have enough signatures to qualify for the ballot, but we will continue collecting a large surplus before submitting them to the DCBOE on Tuesday, February 22nd for certification.”

“The frustration surrounding the repeal of Ballot Initiative 77 was heard by a lot of petition circulators. Voters sympathized with us circulating petitions in a deadly pandemic and colder than normal winter as a matter of necessity due to the D.C. Council’s inaction on the unfair and discriminatory subminimum tipped wage. Today’s milestone is because of tremendous concern of D.C. voters who still feel insulted by the D.C. Council for repealing Ballot Initiative 77 immediately after it was passed into law by voters,” said Adam Eidinger, treasurer of DCCBBRI, as well as the Campaign to Decriminalize Nature D.C., which passed Initiative 81 in November 2020 by 76% of the vote.

“People really recall how a voter approved raise for the lowest paid workers in D.C. was pilfered by arrogance and misinformation in 2018, but today, an enthusiastic electorate is looking to course correct for workers who suffered the most during the pandemic. Democracy is alive in local D.C. and with awareness rising, we are hopeful for even greater voter support this time for eliminating the archaic tip credit,” says Eidinger.

Tipped workers in D.C. make a base wage of $5.05 per hour paid by employers, who are allowed to credit the first $10.15 in tips per hour to satisfy their responsibility to pay tipped workers D.C.’s minimum wage of $15.20 per hour over pay period. When you leave a tip at a restaurant in D.C., the tip credit essentially allows the business owner to credit your tip against the wages they are required to pay their tipped workers. The campaign is not against tipping, rather the campaign is against the unethical practice of using tips to pay workers less than they deserve.

“We are pro-tips, but in the COVID era, we believe tipped workers are accepting work that puts them in harm’s way and deserve a reasonable expectation of actual wages that are not subject to the whims and biases of customers. The campaign’s slogan is “Fair wage, with tips on top!,” says Kris Furnish, a former tipped worker and field director for DCCBBRI.

The campaign developed a COVID era election strategy to succeed in getting Initiative 82 on the primary ballot. In December, seeking to muster signatures from hard to reach voters, DCCBBRI mailed over 13,000 D.C. voters the petition so they could sign in the comfort and safety of their homes. The number of these signatures continues to grow daily with voters signing these petitions and mailing them back with postage paid for by the campaign.

“We are aware that many voters have yet to mail back their petition and in order for these signatures to be counted, we want voters to have the most time possible to return their petitions back to the Campaign,” says Furnish, who helped spearhead the campaign’s mailing. The current mail collection rate already exceeds 12%, more than twice the rate achieved by a sign-by-mail effort in 2020 with Initiative 81.

The sign-by-mail strategy to gather signatures was first deployed successfully in D.C. during the 2020 election cycle and helped secure the passage of Initiative 81, which shifted enforcement of laws concerning natural plant medicines to become among the Metropolitan Police Department’s lowest law enforcement priorities. DCCBBRI utilized in-person petition circulation for most of the signatures, including outside of free covid testing sites at public libraries and fire stations, but also near traditional locations like farmers markets, grocery stores, Metro stations, and at busy street corners, with collectors wearing masks and using other COVID protection measurers, making the feat of collecting thousands of signatures all the more difficult.

Ballot initiatives are afforded 180 days to collect the signatures of 5% of the registered voters in D.C. provided that they also collect the 5% in 5 of the 8 wards. With the Initiative 82 petition being issued on October 13, 2021, the campaign technically has until Friday, April 8 to finish collecting signatures. But in order to qualify for the June 21 primary election ballot, the campaign is required to submit them to the DCBOE by Tuesday, February 22.

D.C. law requires the DCBOE to utilize the official voter registration count published 30 days prior to the submission of the petitions and the official total published on December 31, 2021, states there are currently 524,088 registered voters. The campaign checks every petition against the most recent DCBOE voter roll, which contains the names and addresses of every registered voter in the District of Columbia. For every voter whose name and address match what is written on the petition and in the voter roll, the campaign considers the voter’s signature “valid.” Currently, the campaign has collected over 26,205 signatures that match the voter’s information on the voter roll and are considered by the campaign to be “valid.”. In case there were any mistakes, the campaign will collect as many extra signatures as possible in the final weeks before the deadline.

“Even though D.C. has ‘closed primaries,’ where only voters registered with a political party can vote for their party’s candidate, every registered voter will be able to vote on Initiative 82 because it is non-partisan,” says Nikolas Schiller, a former tipped worker and Communications Lead, who trained over 175 petition circulators over Zoom. With over 400,000 registered Democrats, DCBBRI feels that the contested primary ballot is a better reflection of D.C.’s diverse electorate.

“There are 86,861 D.C. voters who are not registered with a political party who will be able to show up to vote in June and their ballot will consist of only the yes or no question of Ballot Initiative 82,” adds Schiller. “We believe a majority of DC voters will cast a YES vote because they agree that tipped workers deserved a pay raise four years ago.”

DCCBBRI is a political campaign registered with the DC Office of Campaign Finance and is organized by current and former tipped workers in the group One Fair Wage. The campaign received major support from the Open Society Foundation, fair trade and organic body care brand Dr. Bronner’s, as well as over one thousand concerned D.C. citizens who helped collect signatures and believe in eliminating the archaic tip credit in the nation’s capital.

THANK YOU FOR VOTING YES ON INITIATIVE 82!

Tweets by bttrrstrntsdc
We use cookies on this website to give you the most relevant experience by remembering your preferences and repeat visits. By clicking “Accept”, you consent to the use of ALL the cookies.
Do not sell my personal information.
Cookie SettingsAccept
Manage consent