Skip to content
On November 8, 2022, DC Voters passed the "District of Columbia Tip Credit Elimination Act of 2021" aka Initiative 82, by a very large margin. Starting in the Spring of 2023, DC's subminimum tipped wage (currently $5.35 per hour) will graudally increase a few dollars each year and by 2027 Initiative 82 will ensure all tipped workers receive DC's full minimum wage of at least $16.10 plus tips on top!

The entire text of the Ballot Initiative 82 is located at: www.BetterRestaurantsDC.org/i82

Why did you ask me to sign a petition?
From October 13, 2021 to February 20, 2022, we asked voters to sign the official ballot access petition from the DC Board of Elections for Initiative 82 (i-82), the “District of Columbia Tip Credit Elimination Act of 2021.” This ballot initiative would gradually increase the base wage for tipped workers so that it will become the same as non-tipped workers by 2027. In order to qualify for the June 21 primary ballot, the campaign needed to collect the signatures from 5% of the registered voters in 5 of the 8 wards, which is approximately 26,205 signatures.

What about Initiative 77? Hasn’t this ballot initiative been done before?
Initiative 82 is the new Initiative 77. In June 2018, DC voters passed Initiative 77, which would also have eliminated the tip credit and raised the base wage of tipped workers to $15. Unfortunately, the DC Council overturned the voters’ decision. This year we have a new DC Council and it’s unlikely they will try to overturn this ballot initiative. Seven states (Alaska, California, Minnesota, Montana, Nevada, Oregon, and Washington) already have one fair wage with tips on top and have vibrant restaurant workplaces, some thriving for decades. In fact, all seven of these states have higher tip averages than the states with a subminimum tipped wage. If these states can do it, so can DC.

What is a “Tip Credit” and why do you want to eliminate it?
Tipped workers in DC make a base wage of $5.05 per hour. Employers of tipped workers are allowed to credit the first $10.15 in tips every hour to satisfy their responsibility to pay tipped workers DC’s minimum wage of $15.20 over a pay period. So when you leave a tip, the business owner can credit your tip against the amount they are required to pay their tipped workers. The tip credit is a relic of slavery and we believe tipped workers deserve one fair wage, with tips on top.

Doesn’t the current law require employers to ensure all tipped workers make $15.20 an hour?
Yes, but not every employer follows the highly confusing aspects of the tip credit, so wage theft is very common in the restaurant industry. This ballot initiative aims to provide more wage transparency by eliminating the tip credit. The tip credit requires employers to tabulate all the hours worked during the pay period and multiply this by $5.05, then add the worker’s declared tips received throughout the pay period, and if the combined total divided by the number of hours worked is less than $15.20 per hour, the employer is supposed to contribute the difference to ensure the final amount equals DC’s minimum wage. This needlessly complex system ends up hurting tipped workers by legally stealing their tips and calling them “wages.” We can solve this by eliminating the tip credit and instituting one fair wage, with tips on top.

If this passes, can I stop tipping?
You could, but you should always tip for good service. In fact, after this passes you can feel better about tipping because you will know that your tip is not being used as a portion of the server’s base wage but will be a genuine gratuity. Customers are currently subsidizing tipped workers’ wages through their tips, and this initiative aims to end that unfair practice. In the 7 states without the tip credit, customers tip more, not less.

Will restaurant prices go up?
Prices might go up. Due to inflation, they will probably not go down. But if you can afford a $10 burger, you can likely afford a $10.20 burger. That’s a 2% increase in price if the cost of increased wages are passed down to the consumer. The typical restaurant will only need to raise costs by less than a dollar per customer to make up the tip credit. For example, Denny’s menu prices are the same in California (where the minimum wage is $15) as they are in neighboring New Mexico (where the tipped wage is only $2.13).

Have more questions? Call us at 202-733-4640 between 9am and 5pm or email us at Info@BetterRestaurantsDC.org 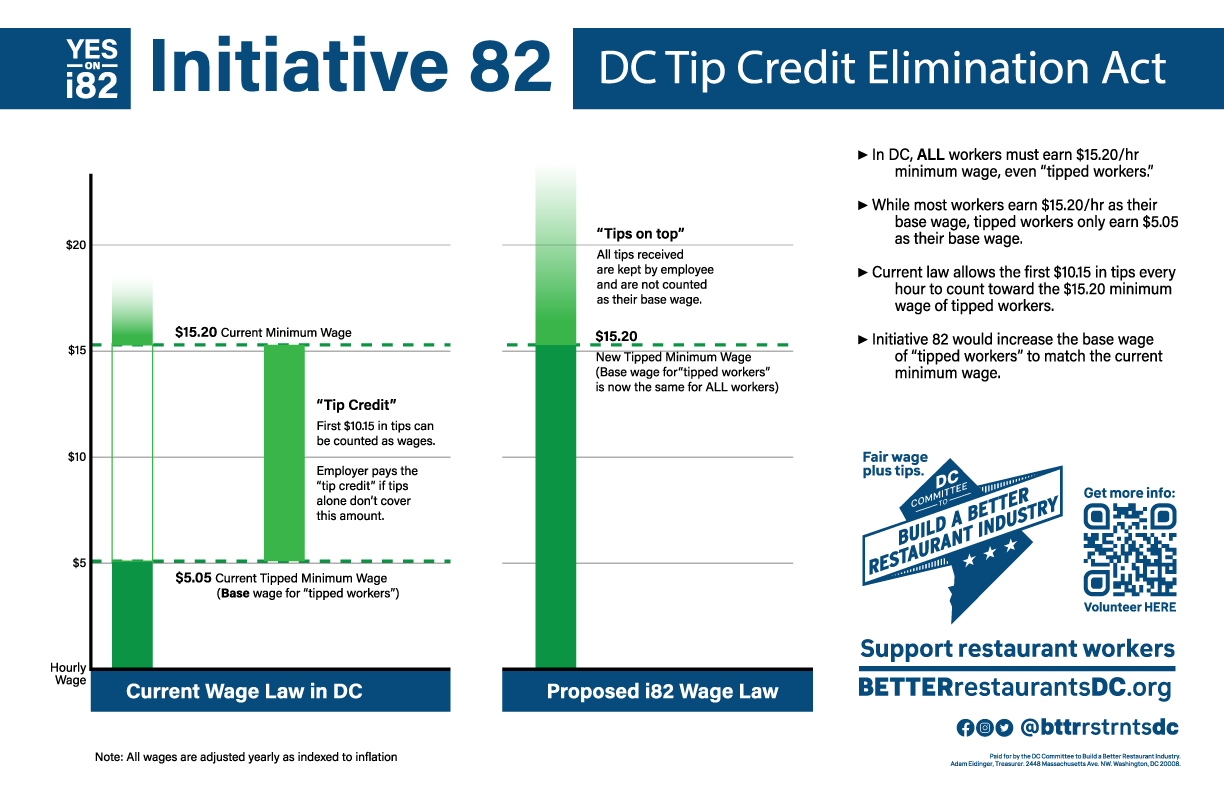 We use cookies on this website to give you the most relevant experience by remembering your preferences and repeat visits. By clicking “Accept”, you consent to the use of ALL the cookies.
Do not sell my personal information.
Cookie SettingsAccept
Manage consent