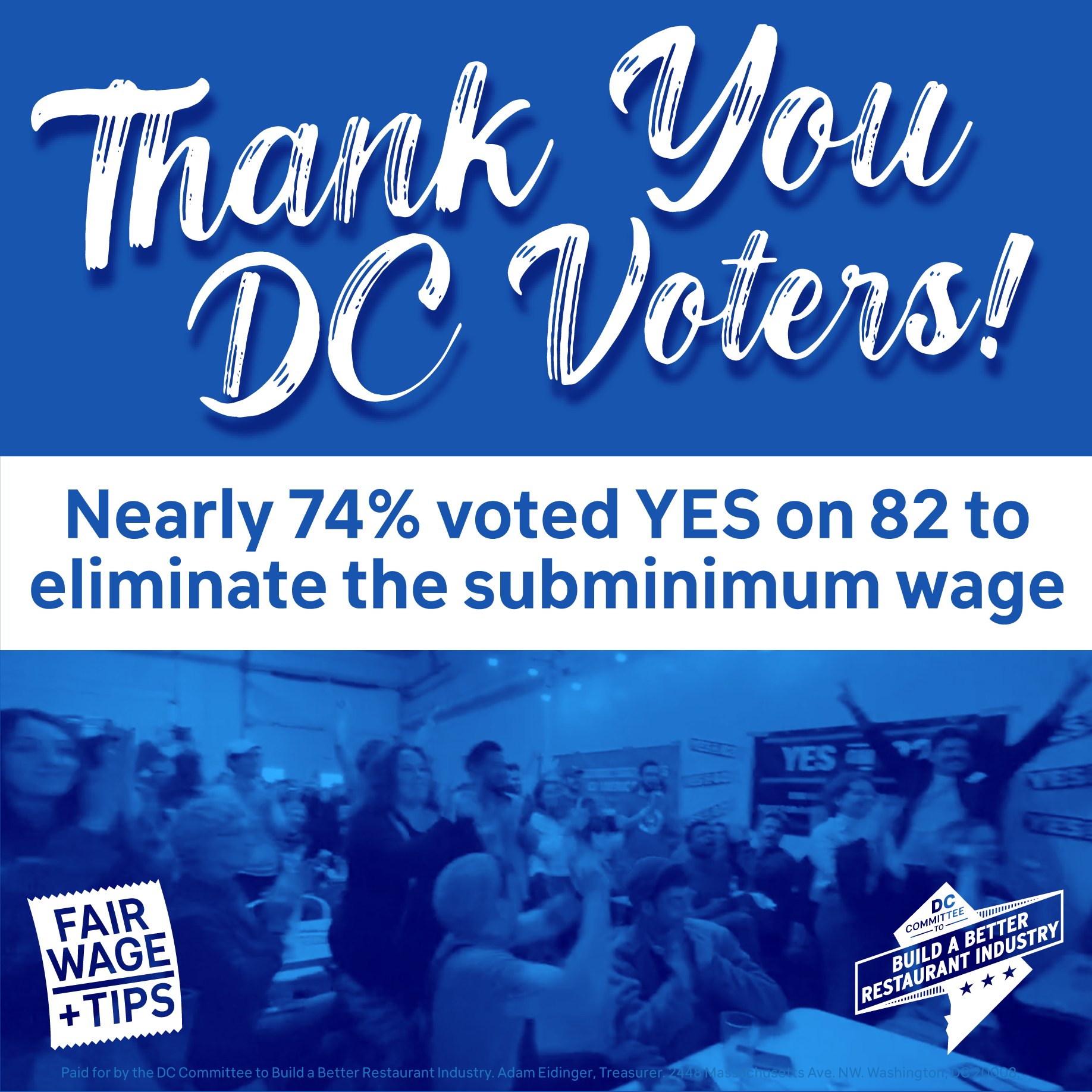 Support Shown in All 8 Wards

Initiative 82 Passes With 74% of YES Vote

WASHINGTON, DC — The DC Committee to Build a Better Restaurant Industry, the campaign committee behind Initiative 82, is thankful that the majority of voters in Washington, DC cast a YES vote in yesterday’s general election. While there are still ballots being counted, the total counted on election night statistically indicates the passage of Initiative 82 with approximately 74% of DC voters casting a YES vote.

“DC voters have once again demanded their voices be heard. This result is a strong rebuke to the Council overturning the will of the people 4 years ago. It’s past time that we pay service workers the full minimum wage plus tips.” said former tipped worker and Initiative 82 proposer, Ryan O’Leary. In 2018, DC voters passed Initiative 77 by a 10 point margin only to have it be overturned by the DC Council later that year. This time around, Mr. O’Leary sought pledges from current DC Council members and six of the thirteen signed. He also was able to receive pledges from newly elected DC Councilmembers Matthew Frumin (Ward 3) and Zachary Parker (Ward 5).

Initiative 82 will not immediately take effect and it is important for the general public to know that the phased-in approach was seen as a better way for the restaurant industry to begin paying its workers more for their labor. Customers should not stop tipping because Initiative 82 was successful. The campaign has always believed customers should always tip for good service.

ESTIMATED TIMELINE OF IMPLEMENTATION
First the election will need to be certified by the DC Board of Elections. This involves counting all the ballots that were postmarked on November 8 as well as provisional ballots from same-day voter registrations. Certification is expected during the first week of December 2022. Since DC is not a state, all DC Council enacted legislation, including ballot initiatives, must go to Congress for their 30 day legislative review period before becoming law. We expect Initiative 82 will be transferred to Congress during the first week of January 2023. Barring a “joint motion of disapproval” being passed by both chambers of Congress, Initiative 82 will become DC law sometime between the last week in February 2023 and the second week of March 2023.

Without everyone’s help, Initiative 82 would still be a dream and now it is a reality!!!

WASHINGTON, DC — Supporters of Initiative 82 and the Metro DC Chapter of the Democratic Socialists of America will gather at Hellbender Brewery (5788 2nd St NE, Washington, DC 20011) starting at 8:00pm to watch the election results roll in. Current and former tipped workers will be present as well as the Initiative 82 proposer, Ryan O’Leary.

Statement from Mr. O’Leary: “We are expecting a historic win for tipped workers tonight.” 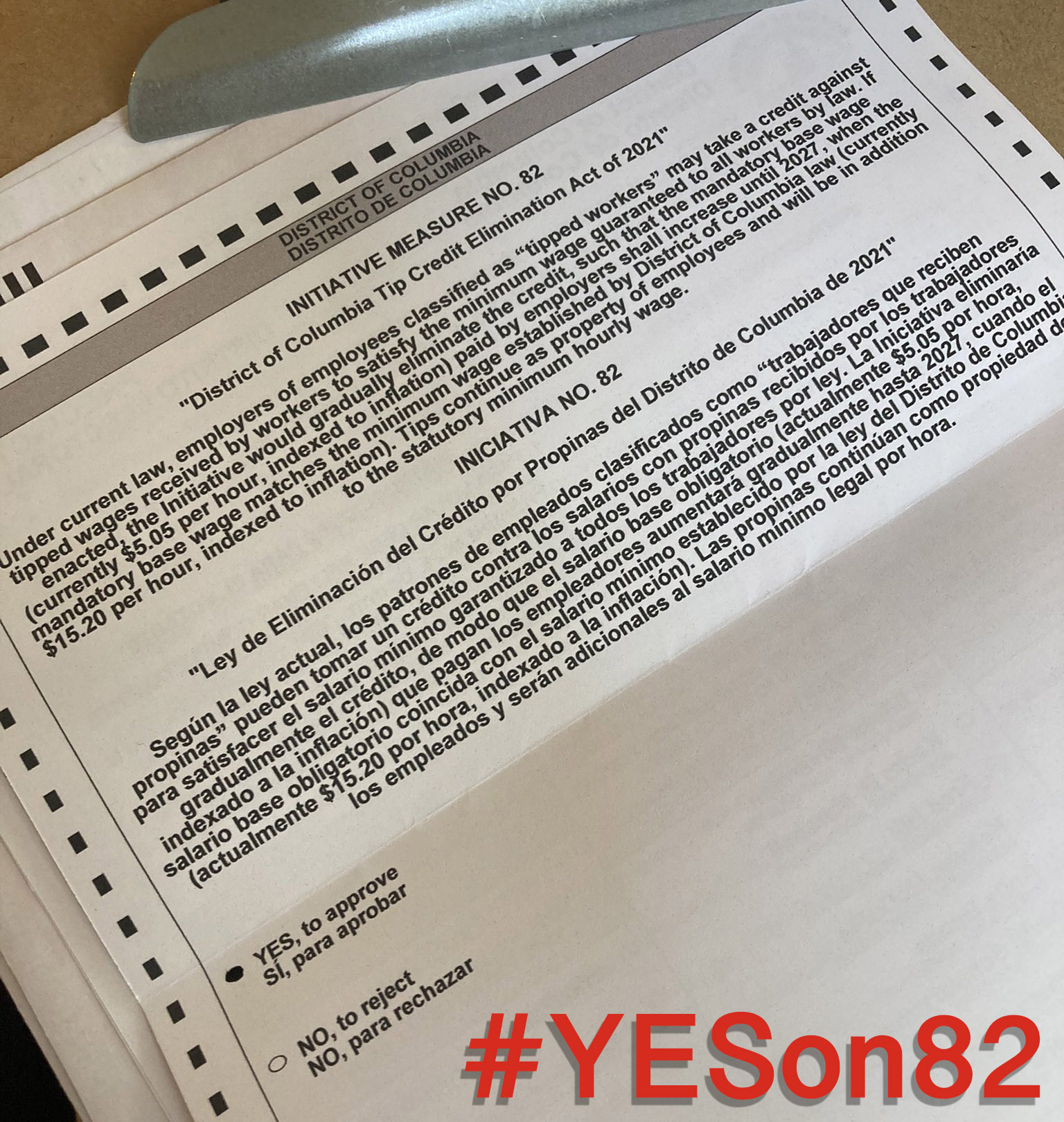 With ballots being mailed to every DC voter, there is no excuse for not being able to cast a ballot this election cycle. Be sure to FLIP YOUR BALLOT OVER and vote YES on Initiative 82 (see above).

Mail-in ballots MUST be postmarked by November 8, 2022 in order for it to be counted. Double check your nearby mailbox pick up time because if you leave it after pick up, it won’t be postmarked until the next day and your vote won’t count.

DC has more ballot drop boxes than some states! You may drop your completed mail-in-ballot in ANY Ballot Drop Box at ANY time beginning Friday, October 14 until 8:00 pm on Election Day, Tuesday, November 8, 2022. Remember to sign the outside of the envelope to ensure your vote will be counted.

If you choose to vote in person, you may cast your ballots AT ANY VOTE CENTER regardless of your residential address. Early Vote Centers are open October 31st to November 6th from 8:30am to 7:00pm. Election Day Vote Centers will be open Tuesday, November 8, 2022 (Election Day), from 7:00 am to 8:00 pm.

Have questions? Give the DC Committee to Build a Better Restaurant Industry a call: 202-733-4640!

THANK YOU FOR VOTING YES ON INITIATIVE 82!

Tweets by bttrrstrntsdc
We use cookies on this website to give you the most relevant experience by remembering your preferences and repeat visits. By clicking “Accept”, you consent to the use of ALL the cookies.
Do not sell my personal information.
Cookie SettingsAccept
Manage consent